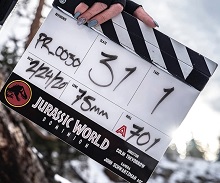 Nominations are now open for the Production Guild of Great Britain (PGGB) Awards 2022 in association with Warner Bros. Studios Leavesden.

The awards recognise achievements of PGGB members working in film and high-end television production in the fields of the production office, accounts, locations, assistant directing, post-production or VFX.

Nominations can now be made by PGGB members until 26 November, with an awards ceremony taking place on 26 March 2022 at The Grove in Hertfordshire.

A special ‘Innovation’ edition of the biannual awards was held virtually in November 2020 to celebrate the innovative work of PGGB members who navigated new ways of working to keep UK production moving in the face of the COVID-19 pandemic. Last year’s PGGB Innovation Award winners included the UK production team behind Jurassic World: Dominion UK.

The Production Guild of Great Britain (PGGB) Awards 2022 categories are:

• The PGGB Film Production Team of the Year Award sponsored by Panalux, acknowledging PGGB members who have worked together across departments on a feature film production and who have achieved something remarkable in their work.

• The PGGB High-End TV Production Team of the Year Award sponsored by Netflix, acknowledging PGGB members who have worked together across departments on a High-End TV production and who have achieved something remarkable in their work.

• The PGGB Inspiration Award sponsored by BCD Media and Entertainment; acknowledging a PGGB member who has helped other members develop within their work and/or career by offering guidance, advice, support and inspiration.

• The PGGB Diversity and Inclusion Champion Award sponsored by Equals Money, acknowledging the work of an individual or company to promote diversity and inclusion in film and High-End TV drama.

• The PGGB Spotlight on New Talent Award sponsored by MBS Equipment Co., acknowledging a PGGB member who, in a junior role, has shown tenacity and ability, great support to their team and a willingness to learn.

• The PGGB Contribution to the Industry Award sponsored by Warner Bros. Studios Leavesden, acknowledging an individual or company that has made an outstanding contribution to the UK film and/or TV drama industry.

Eligible activity for the awards must have taken place between October 2018 and September 2021. Nominees for all awards (except the Contribution to the Industry category which is decided by the PGGB Board) must be PGGB members and can be from film or television drama working within the production office, accounts, locations, assistant directing, post production or VFX.

Full details on nomination criteria and rules of entry can be found here.

Lyndsay Duthie, CEO of The Production Guild said: “The UK film and TV production sector has shown an incredible bounce back following the challenges of 2020/21. Today our members are busier than ever, bringing their skills and experience to an unprecedented number of productions, of all sizes, budgets and genres.

“During such busy times, The Production Guild of Great Britain Awards provide a chance to pause together for one evening, to recognise and applaud the world class standard of their work. We’re delighted to offer a total of six award categories this year, including for the first time, separate awards for Film Production Team of the Year and High-End TV Production Team of the Year, and our new Diversity and Inclusion Champion Award.”