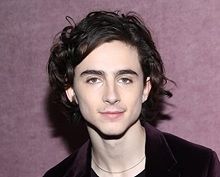 The story centres on the years before Willy Wonka opened his celebrated chocolate factory, including how he came to meet the Oompa-Loompas.


Paul King directs from a screenplay he write with Simon Farnaby; other writers including Simon Rich had previously worked on the script. A starry supporting cast includes Olivia Colman, Rowan Atkinson, Sally Hawkins and Jim Carter.

Filming is expected to run for at least four months; Production Intelligence subscribers can log in for details on the studio base and key UK HoDs.

Chalamet’s dance card is super-busy with several projects in active development. Going Electric is director James Mangold’s biopic of Bob Dylan, with Chalamet lined up to play the celebrated singer/songwriter. The actor is also set to resume his role of Paul Atreides in Dune 2, the second part of Denis Villeneuve’s epic adaptation of Frank Herbert’s novel.