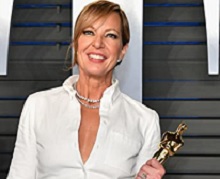 
The People We Hate at the Wedding follows struggling American siblings Alice (Bell) and Paul (Platt), who reluctantly agree to attend the wedding of their estranged, wealthy half-sister in the English countryside alongside their mother, Donna (Janney).

Over the course of the wedding week, the family’s many skeletons are wrenched from the closet, and the unlikely reunion gives everyone the motivation to move their own lives forward.