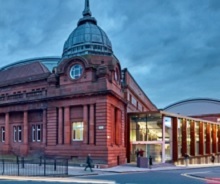 STV Studios has been filming high-end drama Screw at the site for the last three months, starting with a major set-build of a three-storey prison that was undertaken earlier in the year.

The 6 x 60 drama for Channel 4 is created by Rob Williams and stars Nina Sosanya and Jamie-Lee O’Donnell. It is supported by funds from The National Lottery and Scottish Government through Screen Scotland.

Earlier this year, Glasgow City Council confirmed plans to create an £11.9m television and film studio inside the iconic building, establishing a creative hub in the heart of the city. STV Studios has been central to the development.

Sarah Brown, creative director of drama for STV Studios, said: “With its wealth of on and off-screen talent, and range of stunning locations, we loved filming our most recent dramas The Victim and Elizabeth is Missing here in Scotland, so we were thrilled to shoot our latest high-end scripted series north of the border once again.

“We are incredibly lucky to have secured the perfect home for our new production in Glasgow’s iconic Kelvin Hall. Not only does it provide the vast space we need for our three-storey prison set; but its situation right in the heart of the city’s west end made it both a convenient and thoroughly enjoyable place for our team to work.

"We’re thrilled to be playing a critical role in the development of a creative hub that we know will be hugely valuable to Scotland and the wider creative economy.”

David Smith, director of screen at Screen Scotland, added: “It has been fantastic for Glasgow, and Scotland as a whole, that STV Studios and Screen Scotland have been able to work with our colleagues at Glasgow City Council and the Scottish Government to secure Kelvin Hall as a studio space. It is a brilliantly located, very flexible space and its availability was key to the restart of large-scale production in Scotland earlier this year.

The film and TV sector is estimated to be worth up to £500m to Scotland each year.