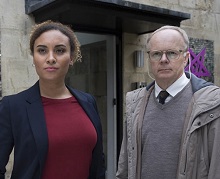 The series comes from Mammoth Screen and creator Robert Murphy, and stars Jason Watkins and Tala Gouveia. The third series, as with the second, comprises three feature-length episodes and will shoot for around 14 weeks.

The previous series was filmed in September last year, and used a wide variety of Bath and Bristol locations.


Wen the third series was officially greenlit, Watkins said of the news: “I’m delighted to be returning to Bath for the third series of McDonald & Dodds… I look forward to filming in the beautiful city of Bath and to Dodds solving more puzzles with Lauren McDonald. I’m bracing myself for more chips in butter!”

Creator Murphy added: “It's a real privilege to for me to return to Bath to re-engage with the world of McDonald & Dodds and our other regular characters.”

The West Country’s profile as a film-friendly destination was further raised when it provided several backdrops for the Netflix Regency ratings-hit, Bridgerton.