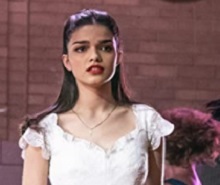 Rachel Zegler stars in the title role; she recently made her feature debut in Steven Spielberg’s much-anticipated West Side Story (pictured), released at the end of this year.


Zegler also co-stars with Zachary Levi in Shazam! Fury of the Gods, currently in production in Atlanta, Georgia.

Marc Webb directs Snow White from a screenplay by Erin Cressida Wilson; Marc Platt produces. The original, animated feature was released in 1937, an adaptation of the 1812 fairy tale by the Brothers Grimm.