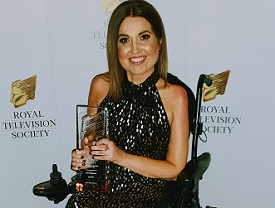 Following last night’s coruscating McTaggart lecture by Jack Thorne, in which Thorne blasted the TV industry for having “failed disabled people, utterly and totally”, we hear a very personal point of view from actor, writer, presenter and producer Kim Tserkezie.

Kim, who is the founder and creative director of Newcastle-based production company, Scattered Pictures, reflects on her 25 years in the business, recounting some shocking experiences and calling for much-needed change.

“I’ve worked as an actor, writer, presenter and producer for 25 years and this year marks a decade managing my production company, Scattered Pictures.

There have been highs over the years, for sure. I was one of the first disabled presenters on the BBC, I played a leading role in the BAFTA award winning series, Balamory. I’ve won an RTS award for my drama performance. My comedy and drama writing has been commissioned by the UK’s leading broadcasters and I’ve developed and produced screen projects with some of the UK’s most successful indies.

There is much to celebrate, but rather than reminiscing on the work I’ve accomplished, I find myself reflecting on the feeling that I have survived this industry as a disabled person, rather than been embraced by it. Even behind some wonderful production experiences, I have faced many painful challenges just trying to do my job, for ableism pervades the entire production process, from writing right through to commissioning. It really shouldn’t be or need to be this hard.

It didn’t start out that difficult. Back in the 1990s, I presented BBC series, From the Edge, reporting throughout the UK on wide ranging items from children’s rights to microlighting. The production was run by disabled people and the in-house Disability Programmes Unit. Appointed access workers ensured our access needs were met so you could concentrate on doing your job. I felt supported completely on and off screen. The department was dismantled to ‘mainstream’ disabled people into the BBC. Well, we all know how well that turned out.

For every job I’ve had since, as a wheelchair user, I’ve never been able to take for granted access would be provided. I recall just recently on a film set, when I flagged up there was no accessible toilet, despite it being clearly requested, the director of the company said to me, “It’s ok, I am a former nurse. I can just help you.”

I’ve rarely had access to make up and costume trailers or catering facilities. Typically attempts made to provide access include segregating me from the rest of the crew and putting me in alternative accommodation. I am left to eat in a room on my own and miss out on the comradery of the green room. Productions can work hard to get it right. I found Balamory really tried and I loved my production team dearly, but even then, things fell through the net. I recall one day just as we were setting off on a shoot from Glasgow to Mull, I picked up a newspaper and there was a picture of the entire cast - excluding me. It was just a bit too much trouble to get me to the location for that shoot it seemed. That one hit me hard. I sobbed the entire journey to Mull. 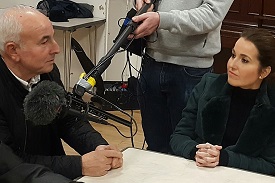 I suggest our industry needs Access Managers working across productions who can coordinate facilities and support, so disabled people can do their jobs safely and inclusively, and without being made to feel that ‘we’ are the problem.

Tired of only being invited into castings to play the stereotypical, pitiful portrayals of disabled people, I learned to write and produce. If the roles weren’t there, then I thought I’d create them myself. This is how I came to set up Scattered Pictures. I’ve assembled amazing teams including award winning directors and producers who embrace my aims to create inclusive productions and to tell stories from underrepresented perspectives.

We have done well in development but find resistance still at greenlight, with notes like ‘but in this script, you haven’t explained how she feels about using the wheelchair’ and that all too familiar ‘we have something similar’. Have you ever seen the perspective of a disabled, working class, Geordie woman of mixed heritage in their forties on screen before? Typically, we appeal only as ‘the medical problem’ and ‘the disability issue’ rather than multi dimensional characters which convey our authentic lives as parents, siblings, friends, workers, spouses, lovers and so on.  We are still being asked to create shows which play to non disabled people’s perspective of what disability means because the entire industry is controlled by non disabled people.

The first TV comedy I created, which also included me in the lead role, made it to pilot. There were no disabled people leading a sitcom at that time, so it felt like progress. The week before recording I was invited into a workshop by the broadcaster. It was like a speed dating session where us disabled actors were asked to share our personal experiences to non disabled writers who were then going to spend a residential weekend incorporating disabled characters into their scripts. I felt so deflated and humiliated. What was the point? I realised there was not a chance my own script would move beyond pilot – and I was right.

“My wheelchair made me too recognisable to the children”

The thing is, there are always excuses, always ableist reasons not to employ us, like the executive producer who informed me I would not be suitable for further roles in kids tv post Balamory because my ‘wheelchair made me too recognisable to the children’.


I supported a film to find a young disabled actor for a lead role. It felt groundbreaking. I discovered a few months ago, the production had given up on that casting when I got a call asking me if I could train their new non disabled lead how to use a wheelchair! In 2021, do I still need to explain to people why ‘cripping up’ is unacceptable?

There are always ways to make disabled people feel like a problem, always reasons to not permit us to lead the narrative. It is too easy to exclude us, because whilst we get the initiatives, the schemes, the disability panels, and occasionally some paid work, we don’t get to share any of the real power. So, who is held accountable for the way we are terribly misrepresented and excluded? We remain the most underrepresented group on and off screen.

Until we see disabled people employed in every part of the production process, and especially in decision making roles, meaningful change will not happen and ableism will continue to thrive. Are there any disabled commissioners in the UK industry right now. Anywhere? In 25 years, I’ve never met one. 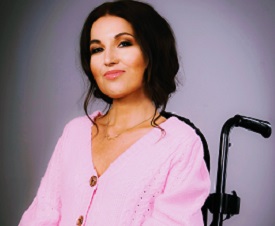 Support and hope for the future

Looking ahead, I’m finding some comfort in new commitments from broadcasters and the appointment of Disability Leads. I’ve experienced some brilliant support from Jen Smith and BFI, who I feel are not only listening, but taking action.  I’m thankful to Steve Titherington and BBC World Service Radio supporting me to present and produce documentaries without turning me into the disability headline. I’m collaborating with some incredible indies who all share my wish to prioritise underrepresented perspectives in comedy and drama in TV and Film.

I’ve been bruised and frustrated by this industry. I’ve been gaslighted and bullied for challenging the systems, to the point it has affected my mental health at times. But I’ve survived. I adore this industry and believe ultimately in its power to do more good than harm, and its ability to create change. I for one, will not give up until disabled people get the equality in this industry we deserve. I look forward to my next 25 years in production with hope.”

With many thanks to Kim Tserkezie for contributing this blog, which has been published unchanged, straight from Kim.