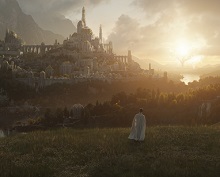 The move consolidates the streamer’s intent to further expand its production presence in the UK – it already has two major Neil Gaiman dramas based at FirstStage Studios, Edinburgh – and its aim to invest in studio space across the UK.

Principal photography recently wrapped on Series One of the as-yet-untitled Lord of the Rings drama in New Zealand, where post-production will continue until June next year.

“We want to thank the people and the government of New Zealand for their hospitality and dedication and for providing The Lord of the Rings series with an incredible place to begin this epic journey,” said Vernon Sanders, VP and co-head of TV, Amazon Studios.

“We are grateful to the New Zealand Film Commission, the Ministry of Business, Innovation and Employment, Tourism New Zealand, Auckland Unlimited, and others for their tremendous collaboration that supported the New Zealand film sector and the local economy during the production of Season One.”

Albert Cheng, COO & co-head of TV, Amazon Studios, added: "As we look to relocate the production to the U.K., we do not intend to actively pursue the Season One MoU five percent financial uplift with the New Zealand government or preserve the terms around that agreement, however we respectfully defer to our partners and will remain in close consultation with them around next steps."

CEO of the New Zealand Film Commission (NZFC), David Strong, said that the country would continue to attract major inward investment productions, despite the loss of the hefty Amazon show:

“We’re an easy country to do business in and New Zealanders have a reputation for being highly skilled, innovative and creative. Our locations are legendary, and we have competitive incentives and infrastructure. This coupled with the Government’s management of the COVID-19 pandemic positions us as an attractive partner for international productions.”

While New Zealand would have welcomed them back to our shores, he said they are a big business, and their decision is commercial and aligns with their strategy of UK expansion.

“In a year of Covid they brought in around NZ$650million and employed nearly 2000 New Zealanders.”

Strong acknowledged the New Zealand cast and crew who worked on the series. “It’s a shame and I feel for everyone who has put their hearts into this production. Season two was expected to begin later in 2022, so our role now is to work hard to keep the Kiwi screen sector employed.”

Strong said their departure opens the door wider to others to come in and that the NZFC continues to work closely with Government on assisting these productions to shoot in New Zealand. “Other internationals have interest in shooting here, and is an acknowledgement of our strengths.”

Strong said that through the production, crew have continued to innovate and work with leading film techniques and technologies, and they can now apply those to future New Zealand and international productions.

“Every production from a short film to a studio streamer is important to us and we will continue to nurture and support all filmmakers to create great shows.”