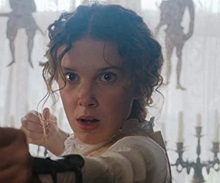 Harry Bradbeer returns to the director’s chair for the follow-up film, having helmed the first feature in summer 2019. Enola Holmes 2 is using a major south-east studio as its production base; PI subscribers can log in for more details on that along with UK HoD names.

Produced by Legendary Entertainment and Brown’s PCMA Productions, the film centres on the younger, rebellious sister of Sherlock and Mycroft, herself an amateur sleuth.

Henry Cavill is also reportedly reprising his role of Sherlock in the sequel. The film franchise is based on the series of books by Nancy Spring, The Enola Holmes Mysteries.

According to local news outlet Hull Live, the sequel will be using Hull’s High Street for location filming in early October.

Enola Holmes 2 is the latest major Netflix production to use the UK. Others already filming include I Came By; Bridgerton Series 2; Hard Cell with Catherine Tate; Havoc with Tom Hardy, currently shooting in Wales; Stay Close; The Crown Series 5, Inside Man and Lockwood & Co.