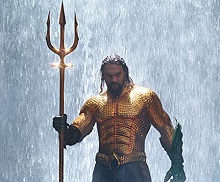 Jason Momoa reprises his role as the watery warrior, that first appeared in DC Comics in the early 1940s.


James Wan is back in the director’s chair for the sequel feature, having helmed Aquaman in 2018. That film shot largely in Village Roadshow Studios on the Gold Coast, Queensland, Australia, with some location work in Italy and Tunisia.

The battle for studio space is well and truly underway, with construction on new facilities, expanded lots and converted spaces taking place all over the UK to try to meet the surge in demand.

In November, The Knowledge is publishing a Studios Directory supplement that will be sent to thousands of production creatives and decision-makers, so if you run a new, existing or emerging studio, please get in touch here to tell us about your offering and find out more about raising your studio’s profile.