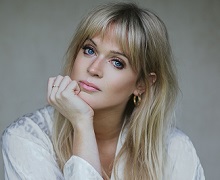 The romantic comedy centres on Maggie and Birdy, best friends since school days, who move into a London house share and together enter the first phase of adulthood.

Alderton (pictured) said at the time of the greenlight announcement: “Everything I Know About Love is a semi-fictionalised adaptation of my memoir of the same name. It’s a messy, boisterous, joyful, romantic comedy about two best female friends from childhood and what happens when they move in to their first London house share and the first phase of adulthood.


"I cannot stress enough how thrilled I am that it is being made by Working Title and the BBC.”

Working Title is also busy in production on a feature film version of the stage hit Matilda, which was reportedly briefly halted last month due to a positive Covid test. The film division has also recently completed The Swimmers and is in prep on Nell Gwynn, a feature based on Jessica Swale's award-winning play about Charles II's mistress and starring Emma Mackey.