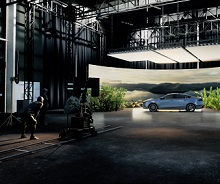 The purpose-built virtual production studio is located in Ruislip, west London. MARS also aims to become a centre of excellence for research and development into VP technologies and workflows; it has been designed and built by Bild Studios.

The facility combines state-of-the-art video game engines, camera-tracking technology, powerful graphics-servers and LED screens. It allows productions to capture scenes and environments in the studio rather than travelling to remote locations or deploying set-builds.

In contrast to a green-screen production, where virtual backgrounds are composed during a long period of post-production, the 3D environments on MARS are created in advance of the shoot, then live-rendered from the camera perspective and mapped onto LED screens - all captured directly on camera.

Directors can update and change the virtual background environments on the fly, such as updating the time of the day or the weather conditions in a scene. This can even be updated directly by the director from a tablet while filming.

In addition, with the use of LED screens wrapping around the set, realistic lighting from the environment itself is provided automatically from the mapped content, allowing skin tones and reflections to appear natural when filmed in the virtual environments.

MARS and Bild co-founder, David Bajt, said: “Virtual Production is an expansion of the traditional filmmaking playbook, enabling studios to pursue greater creative experimentation while controlling the time and cost of production.

“At Bild we have nearly two decades of experience working with tracking technologies, real-time content pipelines and the latest display technologies and our team has been instrumental in exploring and developing VP techniques already since 2016. The opening of MARS represents the next logical step forward for creative leaders in film, high-end episodic TV, gaming, advertising, music, fashion and other creative industries.


“Following our successful pilot of MARS 1 in 2020, it has become increasingly clear that the market appetite for Virtual Production has rapidly accelerated over the last year of the COVID-19 pandemic.

“MARS provides a full-service boutique solution for Virtual Productions, offering a competitive advantage to both traditional and disruptive content creators, across projects of all sizes and budgets. This new permanent facility offers the very latest game-changing real-time VFX production tools and technologies, with the option to create a 270-degree in-camera LED screen up to 38.5m x 5.5m, a 176 m2 out-of-camera ceiling LED screen and a 1400 m2 facility.”

The team behind MARS has collectively worked on a tranche of high-profile projects over the last two decades, including film and TV productions such as Detective Pikachu, Brave New World, Avenue 5 and Infinity; large-scale productions for Cirque de Soleil, MTV EMAs, Dubai World Expo, Madison Square Garden, and Eurovision, as well as concerts and tours for Beyoncé, Lady Gaga, Coldplay and more.