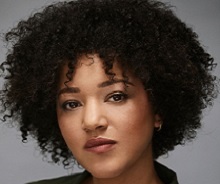 Your Eyes is from Killing Eve writer Isis Davis (pictured above), with themes of family, race and identity, told from the experience of an unconventionally diverse modern family.


Leroux said of the new project: “We are thrilled to be working on Your Eyes - a series which addresses essential conversations surrounding the major issue of systemic racism. Isis is the absolute perfect voice for the series. She brings her own unique, personal background and life experience to explore the themes of racial identity, belonging, class and location.”


Davis added: “As a mixed-race woman growing up in the 90’s, I experienced prejudice because my parents were a different race from me. Now, I have two beautiful little girls of different races, one brown and one white and that is why this project is so close to my heart!

“I am delighted to be working with the wonderful team at Paper Entertainment and I am excited to be bringing such a poignant story to the screen.”


Your Eyes is based on the feature film and series Il a déjà tes yeux, created by Lucien Jean-Baptiste and Sébastien Mounier and Marie-Françoise Colombani.

Creative England has announced the launch of three new Accelerator programmes, offering support and training to early-stage businesses in the games and film & TV sectors.

The Film and TV Charity has launched a wellbeing hub for freelancers, housing a range of bespoke educational tools and resources.

In this KFTV Report: 10 ways to increase diversity and inclusion on your production, Ann-Marie Corvin speaks to leading production and diversity experts to get their insight and tips