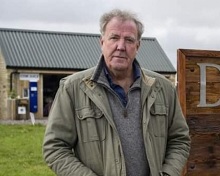 The show launched on the streamer in June with an eight-episode run.


Produced by Expectation, it follows Jeremy Clarkson as he tackles the running of Diddly Squat Farm in the Cotswolds, with help – when he chooses to accept it - from local advisers and professionals.

The show is produced by Expectation and Con Dao Productions for Amazon Studios, the executive producers are Peter Fincham and Andy Wilman and the series director is Will Yapp.

Clarkson said of the S2 pick-up: “I’m absolutely delighted that, once again you’ll be able to spend some time with Cheerful Charlie, Gerald, Lisa and of course, Kaleb. We are such a happy team.”

“It is that authenticity, charm and humour, combined with the farm’s fantastic characters, which have made the series such a remarkable hit with audiences”

“We are delighted to be joining the team for another year-in-the-life of Diddly Squat, and wish Kaleb and farmers across the country luck as Mother Nature continues to take revenge on Jeremy.”