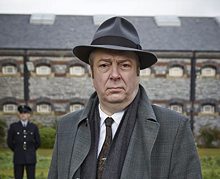 Murder in Provence is from Monumental Pictures and is the first global commission from Britbox; the 3 x 90 eps will be for pan-territory delivery.

Allam plays Antoine Verlaque, Investigating Judge in Aix-en-Provence, and his romantic partner Marine Bonnet (Carroll) as they investigate the murders, mysteries and dark underbelly of their idyllic home. Their efforts are aided by Hélène (Keala Settle), a detective and Antoine’s trusted confidante.

When the commission was first announced, Owen said: ‘We are thrilled that BritBox has given us the opportunity to bring M.L. Longworth’s delightful books to the screen. Shelagh, with her brilliant wit and knowledge of Provence, is the perfect writer to bring Mary Lou's world to life.

“The pairing of Roger Allam and Nancy Carroll as Antoine and Marine is just delicious and promises sparring and fun as they solve crimes in one of the world’s most beautiful landscapes.’