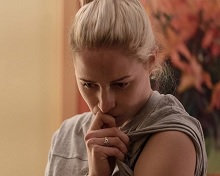 Eddie Marsan and Luke Treadaway are among the cast of Deceit, a C4 drama examining the controversial honeytrap at the heart of the high-pressure investigation into the murder of Rachel Nickell in 1992.

The 4 x 60 series is written by Emilia di Girolamo and is made by Story Films. Ado Yoshizaki Cassuto produces; the exec producers are David Nath, Peter Beard and di Girolamo. Niall MacCormack directs.

Deceit stars Niamh Algar (pictured) as an undercover police officer with the codename ‘Lizzie James’, sent by the police as bait to try to land their prime suspect, Colin Stagg, in the high-profile murder case.

Caroline Hollick, head of channel 4 drama, said: “I couldn’t think of a more phenomenally talented ensemble than Eddie, Harry, Sion, Nathaniel and Rochenda to join Niamh Algar, who is fast becoming an iconic star of the Channel, in order to shine a light on one of the most shocking stories in modern policing.

“The unique female perspective of Emilia’s extraordinary scripts, alongside the stellar performances of our cast, combined with Story Films’ trademark journalistic rigor create a truly sensitive, nuanced and incredibly powerful 4-part drama that we are incredibly proud of.”

Niamh Algar in The Virtues - image via Dean Rogers.

The BBC has announced a tranche of new factual, arts and classical music commissions, including a documentary series about Frida Kahlo and her relationship with Diego Rivera.