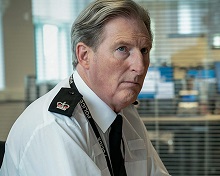 The deal, now in its seventh year, has supported ratings hits such as Line of Duty.


The new agreement seeks to exceed the 3% investment of network television budget from the BBC, which has been the target for earlier agreements.

Rotha Johnston, chairwoman of Northern Ireland Screen, added: "This partnership has delivered for Northern Ireland across drama, children’s and most recently factual/entertainment content. The refined focus within the terms of the renewed partnership on infrastructure, skills, project development and quality production is what’s needed to ensure the long term sustainability of the screen industry here.

"Our ambition for engagement with the BBC continues to rise with this agreement, presenting the BBC network quota as the floor, not the ceiling, for BBC engagement with our flourishing screen industry."

Two new commissions were announced, commissioned as part of the collaboration. Her Name Is Ottilie is a new BBC Arts co-commission between BBC Northern Ireland and BBC Four made by DoubleBand Films, telling the story of Ottilie Paterson, a young singer from Comber in Northern Ireland who found inspiration in the music of Black America and became known as the godmother of British blues. Jazz singer Dana Masters goes on a journey to discover Ottilie’s forgotten story and to reclaim her place in the annals of popular music.

Also announced is Stitch, Please! a new factual entertainment series from Waddell Media commissioned by BBC Three as a result of its collaborative partnership with BBC Northern Ireland and Northern Ireland Screen. Local companies were invited to submit format ideas with the promise of a Factual Entertainment series commission for the network channel.

Hosted by drag queen and social media star Blu Hydrangea from Northern Ireland, who featured in series one of RuPaul’s Drag Race UK, Stitch, Please! will follow two contributors each week, as they compete to create a different outfit inspired by iconic designs from the worlds of fashion, film, television and cosplay. This is the second BBC Three series commission under the agreement having previously greenlit Fast And Farmer(ish) as well as pilots for Scran With My Nan and Fast Food Face Off.