The Devil’s Hour films for Amazon 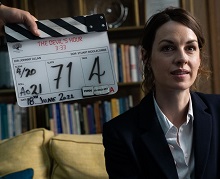 Filming has begun on The Devil’s Hour, an Amazon UK Original from Hartswood Films starring Jessica Raine and Peter Capaldi. Shooting runs for five months in London and at the newly-built Farnborough Film Studios in Hampshire.

The six-part thriller from writer Tom Moran follows the story of Lucy (Raine), who is woken every night by terrifying visions at exactly 3.33am: the devil’s hour.


Her eight-year-old son is withdrawn and emotionless. Her mother speaks to empty chairs. Her house is haunted by the echoes of a life that isn't her own. When Lucy's name is inexplicably connected to a string of brutal murders in the area, the answers that have evaded her all these years will finally come into focus.

The new studios at Farnborough, run by Stage Fifty, are also currently home to another Hartswood drama, Inside Man, filming for BBC One and Netflix.

The company was founded in 1983 and originally housed in the Royal Victoria Patriotic Asylum building in Trinity Road Wandsworth, hence the name. We recently… more Call: 020 8944 4090   |   Add to Shortlist