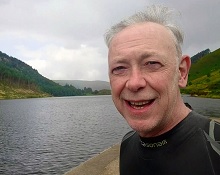 Jones is best known for his work on children’s and science programmes such as Get Fresh and The Big Bang, but he is also a passionate ‘wild swimmer’.

Jones said: "It's going to be a huge challenge but I'm going to give it my best shot. What a wonderful way to rediscover my homeland exploring stories around and beneath the water. This should feel immersive for the viewers too, combining classic documentary techniques with innovative computer graphics revealing the world below and log my biological data as I swim."

"I don't know if I can do this, but what I do know is that it's never been done before. I'm hoping to become the man who swam across Wales!"

Filming will take place in August with TX set for October.

Emergency Medical and Rescue Support for Film and TV Our film location medics come from NHS emergency services backgrounds and have extensive experience of working… more Call: 07535 413303   |   Add to Shortlist