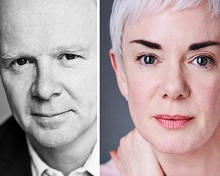 Owen Sheers has written the drama, which stars Jason Watkins as world-renowned Professor Philip Jones, Director of Climate Research at the University of East Anglia, who back in 2009 found himself at the eye of an international media storm and the victim of cyberterrorism – which became known as the Climategate Scandal.

With time running out against an unseen enemy, The Trick looks at how a media storm undermined public confidence in the science and how the concept of ‘truth’ took a back seat causing the loss of a decade of action. The film also charts the unjustified persecution of Phil Jones, his wife Ruth’s fierce support of her husband and the fight for the ultimate exoneration of himself and the science.

Watkins said of the project: “It is rare that a drama marries the personal and the public in such a compelling way - the urgent need to tackle the effects of the earth’s warming is not going away and the research into this project has been sobering.

“It is a privilege to play the brilliant scientist, Phil Jones, whose own private world was so threatened from outside and whose research and efforts have been so vital globally in combating the effects of climate change. I’m delighted to be performing alongside Victoria, the whole exceptional cast and with Pip Broughton, whose singular and beautiful work I so admire.”