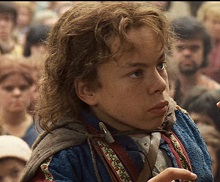 Jonathan Entwistle is in the director’s chair for the hefty shoot, having replaced Jon M Chu who dropped out over scheduling issues.

The story takes place years after the events of the original Willow film and introduces new characters to the kingdom of fairy queens and two-headed Eborsisk monsters.


When the greenlight confirmation came last year, Davis said: “So many fans have asked me over the years if Willow will make a return, and now I’m thrilled to tell them that he will indeed.”

“Many have told me they grew up with ‘Willow’ and that the film has influenced how they view heroism in our own world. If Willow Ufgood can represent the heroic potential in all of us, then he is a character I am extremely honoured to reprise.”

Wales is a long-established international production hub, a status boosted by the presence of production company Bad Wolf and its studio space.