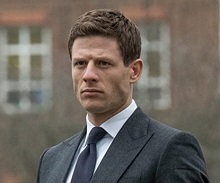 Based on real-life events, the thriller explores how Freegard managed to convince his many victims that he was working undercover for MI5, in order to extort and kidnap them.


Arterton plays the woman who eventually brings him down; Shazad Latif co-stars alongside Marisa Abela, Edwina Findley and Julian Barratt.

The film marks the feature debut of Rabbit Track Pictures, the production company founded by Norton and Kitty Kaletsky. It is a co-production with The Development Partnership and made in association with Great Point Media.

When the film was announced last year, the writers said: “As soon as we heard the pitch for Freegard we were hooked. It’s one of the extraordinary stories of our times – a surreal tale of deceit and manipulation played out over many years. James is one of the finest actors around and it will be a true pleasure working with him and the rest of the team at Rabbit Track, TDP and Great Point.”

Norton remarked: “We are so excited to be working with Adam Patterson and Declan Lawn. Their incredible show The Salisbury Poisonings was both gripping as well as deeply human, and showed their unique skill for dramatizing true stories.”