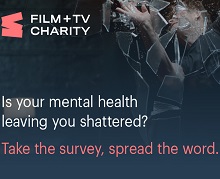 The Film and TV Charity has relaunched its Looking Glass Survey, two years after the 2019 research project first revealed serious mental health issues within the industry.

The results of the re-issued survey will enable the charity to track trends and adapt the support services it offers, and influence the £3m Whole Picture Programme that was launched as an urgent response to the outcomes of the original research.

The charity is calling on everyone who works in the industry to complete the survey and share it with their colleagues.

In 2019, the Looking Glass research captured the experiences of more than 9,000 people working in the industry, uncovering a high prevalence of mental health problems – 87% reported having experienced poor mental health, far higher than the 65% UK national average, and more than half (55%) reported having considered ending their life. Another serious finding was a working culture in which 82% of respondents had experienced or witnessed bullying behaviour.

As a result of the original research, the Film and TV Charity is developing a range of interventions designed to increase support for individuals and instigate sustained culture change within the industry. In March, the charity launched one of the first major outputs of the programme, a suite of Bullying Pathway services, designed to offer expert guidance and resources to support individuals who have witnessed or experienced bullying, harassment or discrimination.

The charity is also piloting a Toolkit for Mentally Healthy Productions with a range of small and large production companies, a flexible set of guidelines that puts wellbeing at the centre of all productions made in the UK, and later this year will launch a flagship behaviour change campaign.

Alex Pumfrey, CEO, The Film and TV Charity, said: “Our 2019 Looking Glass survey confirmed what many already knew – that people working in the film, TV and cinema industry are disproportionately more likely to suffer from poor mental health.


"With the events of the last 12 months having increased the pressure for many, we are asking every colleague from across the industry complete the survey again, or for the first time. As well as acting as a crucial barometer of the wellbeing of our workforce, it will help us to design the support services people need, and will contribute to the delivery of meaningful, systemic change that we know will benefit everyone.”

You, a shiny new Sky One drama from writer Ben Chanan, has begun filming in Europe, with a production base in Berlin.

Work has begun to build two new sound stages and ancillary workshops on the site of the former Big Brother house at Elstree Studios.

Another huge new studio for London

London is set to get another major new film and TV studio as the demand for content and studio space continues to swell.