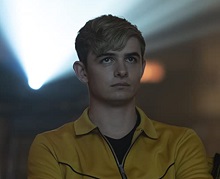 The novel, published today, 27 May, will be adapted by Zara Hayes and Jonathan Stewart; Hayes will also direct. Casey serves as executive producer on the adaptation, alongside Jill Green, Eve Gutierrez and Paula Cuddy from Eleventh Hour Films.

Casey is the author of eleven crime novels for adults and three for teenagers. A former editor and married to a criminal barrister, Casey has a unique insight into the underbelly of crime. The Maeve Kerrigan series has been nominated for many awards: in 2015 Jane won the Mary Higgins Clark Award for The Stranger You Know and Irish Crime Novel of the Year for After the Fire. In 2019, Cruel Acts was chosen as Irish Crime Novel of the Year at the Irish Book Awards and was a Sunday Times bestseller.

Cuddy, creative director, Eleventh Hour Films, said: “The Killing Kind is an exceptional thriller from the brilliant Jane Casey, which delivers the twists, turns and emotion to grip a global TV audience. Ingrid is a compelling protagonist, whose story is most timely as she navigates professional and personal ethics, her journey making us question ‘justice’ in every sense. We are delighted to be bringing this to screen and with the brilliant Zara Hayes and Jonathan Stewart on board we couldn’t be in better hands.”

Casey added: “I am thrilled to be working with such an incredible team to bring The Killing Kind to TV. Having had amazing support from United Agents and HarperCollins in developing the book from my original idea, I'm delighted to see it published today. Zara and Jonathan’s creative response to the book is enormously exciting and I look forward to working with them, Paula Cuddy and the team at Eleventh Hour Films to tell Ingrid’s story in a new way.”

Eleventh Hour Films is busy in production on Series 2 of Alex Rider, currently filming in Bristol. Also shooting is Magpie Murders, with Lesley Manville and Tim McMullan, some of which is filming in Suffolk.