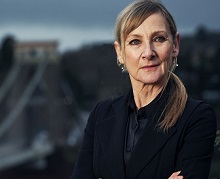 Part of the remit is to relocate the story setting – in this instance, Bristol.

The six-part crime thriller began filming in September 2020 with the assistance of the Bristol Film Office and continued until spring 2021.

A raft of Bristol locations were used, including Stokes Croft, Victoria Square and The Paragon in Clifton, Brandon Hill Park, York Road, Clarence Road and The Horsefair. The production team carried out aerial filming above a number of Bristol’s green spaces, including Sparke Evans, Netham and Castle Parks. Filming also took place in Belgium.

Describing the choice to film in Bristol, exec producer Jo McGrath said: “We wanted to set it in a port city, as that is important to the drug trafficking storyline. We were looking for something a little less familiar and Bristol is one of those cities that actually has been used as a backdrop for filming a lot, but you wouldn’t know it because a lot of series are filmed there but not set there.


“Bristol is such a visually interesting city and editorially it fitted with our storyline. Belgium also features in our drug trafficking storyline. Jan (the director) is Belgian too and we did shoot many of the interiors in Belgium.”

Director Jan Matthys added: “For me, part of the challenge was making Belgium match with the other scenes in Bristol – which was interesting. We became specialists in ‘Anglifying’ Belgium.”

Describing the process of filming during the pandemic, Iuzzolino said: “Putting in place incredibly strong and sophisticated protocols to make sure that everybody was safe and adhering to the rules gave us some unexpected advantages through the ability to bubble. This meant that the bubbles of creatives, actors and heads of departments were able to take themselves out of reality for a few months, living together to keep safe and keep working.


“They made the sacrifice, but it paid off because the performances were enhanced from all being together and living in this bubble whilst bonding on and off screen. I think this has truly resulted in great performances.”

Back due to popular demand – The Knowledge book!

This year we have had more requests than ever for print copies of The Knowledge book so we really can say it is back due to popular demand!