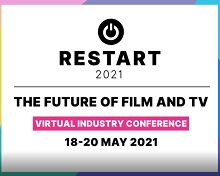 The line-up of top industry names will be discussing a range of topics via the virtual events platform Hopin. Attendees will have the opportunity to network with their industry peers through the Events Chat functionality and can also request one-to-one meetings.

Our sister site, KFTV, is hosting a session called Opening the International Production Floodgates on Day One, 18 May, at 15.15.

In light of all of the hurdles that the industry has faced in the last 12 months and the potential of the production floodgates likely to burst open as a backlog of film and TV projects get up and running, the panel will discuss the options around filming in the here and now within the production landscape, how things will be different on set, and what lessons have been learned from these extraordinary times.

They will delve into issues such as  production protocols; logistics of getting to different territories and filming there; the importance of local expertise (location managers, crew, production service companies etc); insurance requirements; studio space; explore the variety of locations on offer (natural and alternative studio spaces – warehouses, forts, factories etc); latest incentives etc.

Join this expert panel to help you plan your next production.

The session will be chaired by news and locations editor, KFTV, Chris Evans, with a panel comprising:
Location managers Mike Fantasia and Georgette Turner alongside line producer/UPM Sam Breckman and Mike Day, CEO of Palma Pictures.

The session is sponsored by Palma Pictures.

Register now for Restart and become part of the discussion.