Sky thriller to film in the Lake District 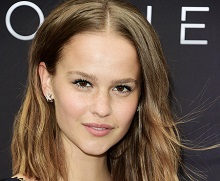 Shooting will take place in the Lake District. Clara Rugaard (pictured), Nenda Neururer and Solly McLeod star in the 8 x 60 series, which is executive produced by Julian Stevens.

The Rising tells the story of Neve Kelly (Rugaard), who discovers that she is dead. She's scared and confused by this new existence. But, when she realises she has been murdered, she’s furious. She’s determined to find her killer and get justice, believing that it was someone she knew.

Stevens commented: “The Rising grabbed me instantly as an incredibly unique concept. It’s a powerful story with a strong and unexpected protagonist at the heart of it. We explore subverting tropes throughout, giving agency to our central character and allowing the entire narrative to be told from her perspective. It’s a pleasure to be working on such a compelling and dynamic show.”

The Rising was first listed on our subscription-only site, Production Intelligence, in early December, with a round-up of HoDs and shoot dates. For a free walkaround of the site, click here.