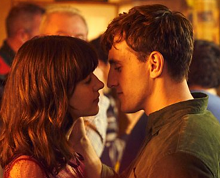 The National Film and Television School (NFTS) is running a two-week online course on the art of adaptation, with the chance to pitch your idea to a head of development at All3Media.

Adaptations currently account for more than 50% of the drama output on global television, with recent adaptations of books such as Normal People, Big Little Lies, Unorthodox and Killing Eve joining the more traditional roster of period classics.

During the course, participants will write the first episode of an adaptation based on a novel of their choice. The course is led by Peter Ansorge, ex-head of drama at Channel 4 who began as a script editor in David Rose’s groundbreaking drama department at the BBC.

Several of the scripts completed on Peter’s courses at NFTS Beaconsfield and NFTS Scotland are currently in development with leading UK drama independents.

Participants will be expected to write approximately five minutes of their script each evening. The scenes will then be discussed the following day as in a professional writers’ room. Examples of successful TV adaptations will be discussed and analysed.

You will be free to choose your novel, contemporary or classical, without having to acquire the rights. At the end of the course you’ll pitch your pilot and novel as a calling card to a head of development at All3Media.

Click here for more on course fees and how to apply.