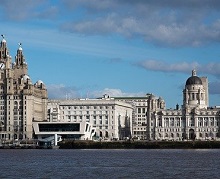 The crime drama is from writer Tony Schumacher and Dancing Ledge Productions, with funding and support from the Liverpool Film Office through the LCR Production Fund.

The 5 x 60 crime drama centres on Chris (Freeman), a crisis-stricken, morally compromised, unconventional urgent response officer tackling a series of night shifts on the beat in Liverpool.  Schumacher is an ex-police officer and the Responder marks his first original series for television.

The writer said: “I'm so incredibly fortunate to be writing for a cast as amazing as the one we've assembled for The Responder. From legends at the top of their game, to young talents who are legends in waiting, it's a writer's dream come true.”

Bowen added: “Finding an extraordinary new voice like Tony Schumacher’s doesn’t happen often, so we couldn’t be more excited to be bringing it to life on BBC One, and with Martin Freeman, one of the most exciting actors around. Producing The Responder is a great privilege.”

Liverpool is a long-established production hub, able to support several major projects at any one time. The iconic Littlewoods Pools building is currently being converted into a film and TV studio, while two new, purpose-built sound stages nearby are due to open this spring.