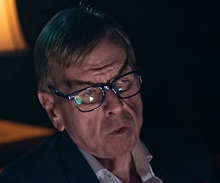 Timothy Spall has joined Lesley Manville to head the cast of The Magpie Murders, an adaptation of Anthony Horowitz’s best-selling crime novel that begins production next week, 8 March, in Suffolk and Ireland.

The six-part series is directed by Peter Cattaneo and comes from Eleventh Hour Films for delivery to BritBox UK and MASTERPIECE on PBS.

Spall said: “I am delighted to be part of this adaptation of Magpie Murders, and to be working once again with the immensely talented Lesley Manville, Peter Cattaneo, the fantastic cast and all the team at Eleventh Hour Films. I have huge respect for Anthony Horowitz and think the audience will really enjoy his brilliant adaptation of his wonderful and ingenious novel. I’m really looking forward to getting to grips with bringing the intriguing Atticus Pünd to life.”

Jill Green, chief executive, Eleventh Hour Films, added “Atticus Pünd is a complex, deep thinking 1950s detective who is at the top of his game – so who better than to have Timothy Spall?”

Horowitz commented: “I was overjoyed when I heard that Timothy Spall had accepted the part of Atticus Pünd. I’m a lifelong fan and there isn’t another actor in the world I would have chosen for this pivotal role.”

Eleventh Hour is also busy in production on the second series of Alex Rider for Amazon Prime, which began filming in Bristol in late January.