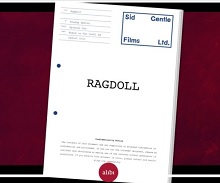 The gruesome plot centres on an investigation into the murders of six people, who have been dismembered and sewn into the shape of one grotesque body - nicknamed the 'Ragdoll'. The 6 x 60 will film this spring around London, and will also air on AMC in the US.

Lead writer Syborn said: “I hope Ragdoll will be a visually exciting, darkly funny thriller in which the personal is the political. Above all, I hope our characters can make you laugh, then break your heart.”

Sally Woodward Gentle, executive producer, Sid Gentle Films, added: “I am so excited that we are embarking on this twisty and sophisticated piece with Freddy and the team. AMC have already proved themselves to be brilliant partners and we can't wait to work with Alibi.”

“Together, they tread a maverick route to the truth in a broken world, with touches of Raymond Chandler meets Tina Fey in their memorable banter. Beautifully designed, this atmospheric project mirrors the pure evil, suspense and attention to detail of Silence of the Lambs.”

Ragdoll will be executive produced by Woodward Gentle and Lee Morris for Sid Gentle Films Ltd along with Syborn. Dan McDermott and Kristin Jones will lead for AMC with Cousins for Alibi. Lizzie Rusbridger produces.