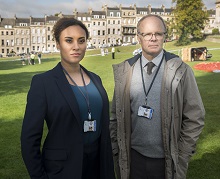 Locations in and around Bath and Bristol provided the backdrop for filming on the second series of contemporary detective drama McDonald & Dodds.

A number of locations were used in Bath, including Royal Victoria Park, the Guildhall and the Indigo Hotel on South Parade.

Several locations in Bristol were also used. The city’s huge A Bond Tobacco Warehouse on Cumberland Road was transformed into a wartime bunker, while filming also took place on Berkeley Square and at City Hall, in the Lord Mayor's Reception Room.

Laura Aviles, senior Bristol film manager said: “We were delighted to welcome Mammoth Screen back to Bristol for the second series of McDonald & Dodds, supported by our Film Office. This is another great example of how together Bristol and Bath make the West of England a fantastically strong choice for TV and film production, which companies return to again and again.”

Councillor Paul Crossley, cabinet member for community services, said: “It’s fantastic to see a contemporary drama on primetime television which is set in Bath. McDonald & Dodds was a big hit with viewers last year and so we were delighted to welcome the production team back to the city to film the second series.

The new series of McDonald & Dodds sees Tala Gouveia and Jason Watkins reprise their roles as the smart and ambitious DCI McDonald and the humble and quietly brilliant DS Dodds.

Other recent productions to have used the West Country include the BBC’s new adaptation of Nancy Mitford’s The Pursuit of Love starring Lily James and Netflix’ smash-hit period drama, Bridgerton.