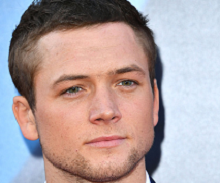 Directed by Scot Jon S. Baird (Stan & Ollie) and produced by Matthew Vaughn (Rocketman), the project is currently filming in Glasgow, despite Scotland being in lockdown.

Last month, Egerton, who plays Dutch video game entrepreneur Henk Rogers in the movie, had to go into self-isolation after a crew member tested positive for Covid-19.

The story centres on a legal battle over rights to iconic 1980s game Tetris, invented by computer whizz Alexey Pajitnov, 64, in Soviet Russia.

The film is being produced and financed by Matthew Vaughn’s Marv Films, with Leonard Blavatnik’s AI Film. Producers also include Gregor Cameron via his banner Unigram, which has tied up with AI Film (this is the first project from that pact), and Gillian Berrie.

Screen Scotland helped bring the production to the country and provides guidance for filming on its website.