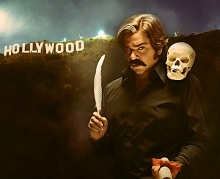 Matt Berry is set to reprise his role of Steven Toast, this time for BBC One, as the broadcaster has ordered a new series, Toast of Tinseltown (w/t).

Written and created by Arthur Mathews and Matt Berry and produced by Objective Fiction in association with wiip, the 6 x 30 comedy follows Toast as he moves to Hollywood and attempts to become a film star. Filming will take place later this year.

Three series of Toast Of London originally aired between 2013 and 2015, all written by Mathews and Berry; the latter won the BAFTA Best Male Comedy Performance for his role.

Berry said: “I couldn't be more thrilled to not only be working with Arthur and the rest of the Toast family again, but to also be taking the show to the BBC which I know Toast himself would very much approve.”

Arthur Mathews says: “It was a thrill to be writing Toast again after a long gap. Hollywood is a brave new world for Toast. There will be triumphs and tribulations (but mostly tribulations - and indeed humiliations).”