BBC One orders final series of The Split 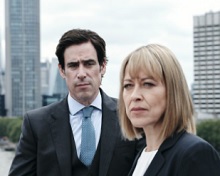 BBC One has ordered a third and final series of Abi Morgan’s The Split from Sister Pictures.

Set against the backdrop of London’s high-end divorce legal circuit, the series centres on the three Defoe sisters, played by Nicola Walker, Annabel Scholey and Fiona Button, and their mother Ruth (Deborah Findlay). Stephen Mangan and Chukwudi Iwuji are among the supporting cast.

Jane Featherstone, Lucy Dyke and Lucy Richer executive produce along with creator Morgan; Dee Koppang O’Leary will be back on board as lead director. Emma Genders produces.

Morgan said of the commission: “It’s great to be back writing for the Defoe family, and to dive once more into to the complications of their lives and those of their clients.

“In the final series of this bittersweet trilogy, Hannah faces the heartbreak of her own divorce, and the fight to save her family and her marriage. Siblings clash, past mistakes are exposed and hearts are broken as Noble Hale Defoe notches up more billable hours in the divorce capital of the world.”

Added Featherstone and Dyke: “When Abi first came to us with The Split, she envisioned it as a trilogy. And it's been a constant joy to work so closely with her to bring to life her beautifully truthful study of modern marriage.

"None of this, of course, would have been possible without the conviction and support of the BBC and AMC Networks who have always trusted the narrative and given total freedom to the way in which Abi wanted to tell it. We are so grateful to our wonderful cast for their passionate commitment across three series.”