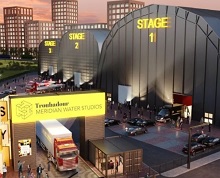 Phase one of the plan will see three of the stages built this year; measuring 20,921 sq ft, 11,216 sq ft and 8,213 sq ft. There will also be production offices, dressing rooms and extensive space for workshops, parking and load ins.

Phase two will see the construction of a further three studios planned to be completed by 2023; the largest of which will be 40,000 sq ft, and the other two 20,000 sq ft. These will also have workshops and office space (measuring 3,500 sq ft).

A statement from the local authority said that the facility will be the largest studio complex “inside the North Circular” and is set to open by spring 2021.

Troubadour said the site offers excellent transport links being just off the North Circular and is in striking distance from all major London airports. The soundproofed studios are fully flexible and adaptable with excellent weight bearing capabilities, making them ideal for hire within the film industry.

A skills academy will also be built on site so local residents can be trained on how to work in the film and television industry.

Enfield Council leader Nesil Caliskan said: “This agreement will plug the local economy of Edmonton and Enfield into the dynamic international film and media sector and means Enfield is poised to become one of the leading London boroughs for high-end television and film production.

“The delivery of film studios is the boldest and most exciting project in Meridian Water to date. It would help transform Meridian Water into a destination by providing a major public theatre venue and help stimulate the economic regeneration of the borough through the training academy and a new media and arts hub.”

This news follows a string of recent announcements about other studio developments cropping up around the country, including in nearby Dagenham, Elstree, Reading and Liverpool.