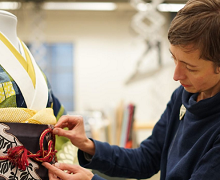 The 6 x 60 run will go behind the scenes of the iconic V&A, whose collection of more than 2.3 million objects spans over 5000 years.

Series Two will explore the story of the some of the objects and take a look at some ‘hidden gems’ not on display and follow the work of the curators, conservators and technicians.

The executive producers for Blast! Films are Alistair Pegg and Ed Coulthard. Rob Farquhar is series director and the series producer is Vari Innes.

Tristram Hunt, director of the V&A, said: “At a time of renewed lockdown and enforced separation from our great cultural centres, we are even more delighted to invite audiences back for another behind-the-scenes look at the V&A.

“Though the museum remains closed, Secrets Of The Museum continues to uncover untold stories from our dedicated teams and the fascinating objects stored within one of the nation’s best-loved museums.

"The V&A is very proud to be part of the BBC’s Culture In Quarantine initiative and our shared determination to share the people’s collections.”

Alistair Pegg, Director of Programmes, Blast! Films, says: "Despite the lockdowns over the last year, work behind the scenes at the V&A has continued unabated, and we’re delighted to be going back to the museum to uncover more hidden stories of fantastic objects.”