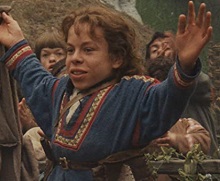 On his Twitter account, using the words “heartbroken” and “devastated”, Chu explained that with a shifting production schedule, due to the UK lockdown, and with a new baby expected this summer, the project was no longer going to work for him and his family, timing-wise.

Production on Willow is due to begin in Wales this spring with filming due to run for at least five months. Although the production industry is exempt from the stay-at-home rules currently in place in the UK, many projects are adjusting their dates to accommodate all the safety protocols and stringent on-set regulations that must be in place, with shoots often running over the original timeframe as a result.

Warwick Davis returns to star in the new series, reprising his role of Willow Ufgood; the director of the original film, Ron Howard, is among the executive producers. Willow will be Lucasfilm’s first non-Star Wars scripted project since 2015 and takes place years after the events of the original 1988 film.

The series, which is Lucasfilm’s first non-Star Wars scripted project since 2015, takes place years after the events of the original Willow film. It introduces new characters to the kingdom of fairy queens and two-headed Eborsisk monsters.

Production in the UK was suspended completely during the first lockdown that began in late March 2020, but by the summer, the government had greenlit the safety guidelines published by the BFC, compiled with the help of many industry bodies, and the screen sector continued to work during the second lockdown in November, while adhering to the safety guidelines.