New studios to open in Hartlepool 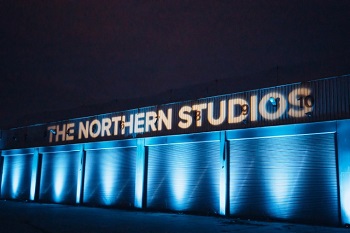 Work is underway on the north-east’s first dedicated film and TV studios, based at The Northern School of Art’s Hartlepool campus, with an aim to be open for use in the summer of 2021.

The £3.76m project will create The Northern Studios, a new 30,000 sq. ft. film and television studio development for commercial use, repurposed from the town’s former bus maintenance sheds.


The facility will sit alongside a new teaching building to support specialist technical and skills training for undergraduates studying on the School’s stage and screen degrees.

The Northern Studios have been developed with industry specialists and will cater for professional film and television production companies making films and high-end TV programmes.

The scheme is a collaborative project funded by the Tees Valley Mayor and Combined Authority, including £1million of Local Growth Funding from the government, working in partnership with Hartlepool Borough Council, on whose former land the studios are being created.

The site will offer large-scale sound stage facilities and a large green screen studio appropriate for visual and special effects and corporate, promotional and marketing videos. There will be a full range of production offices, facilities for cast and crew alongside green rooms and a large secure lot for production units.

Tees Valley mayor Ben Houchen said: “From the hugely popular detective series Vera to blockbuster war film 1917, Teesside, Darlington and Hartlepool have hosted some amazing film and TV productions and there are always companies looking to film exciting, large-scale productions region. This brilliant new development will provide an even bigger draw for them, helping to support our fantastic creative sector and create good-quality well paid jobs for local people eager to work within TV and film.

“It will go even further in training our students, giving them practical, hands-on experience as the industry as well as showing them they don’t need to leave the region for a successful career in their field. To top it all off, the lead contractor is a local firm, supporting my plan for jobs, including in our vital construction sector.”

Councillor Christopher Akers-Belcher, chair of Hartlepool Borough Council’s Regeneration Services Committee, said: “Hartlepool already has strong links with film and television, through the Northern School of Art, as the town where director and producer Sir Ridley Scott studied and as a go-to filming location for a host of TV and film productions.

“The new studios will open a fantastic new chapter in that story, and we are delighted to be helping to make that vision a reality.

“We look forward to Hartlepool growing into an important centre of creative excellence in film and television, building a reputation both nationally and around the world.”

Netflix sci-fi drama The One filmed in Bristol

A new futuristic drama for Netflix, The One, filmed in various Bristol locations with assistance from the Bristol Film Office.

Applications are now open for the fourth Felix Dexter Bursary for BAME writers, to train an aspiring comedy writer or duo to develop their skills at the BBC and via virtual industry placements.

A TV production facility is part of a major new creative content hub planned for Birmingham.

Applications are open for round three of The Production Guild of Great Britain’s High Level Covid Supervisor Training, which takes place online on 6th and 13th March

Gareth Evans will write, direct and produce Havoc, starring Tom Hardy, as part of a new, exclusive partnership he has signed with Netflix.

Michael Caine and Glenda Jackson are set to star in The Great Escaper, a film inspired by the true story of 2014 when Bernard Jordan escaped from his care home to attend the 70th Anniversary of the D-Day Landings in France.