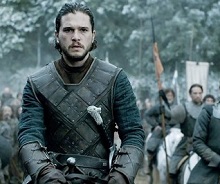 John Francis Daley and Jonathan Goldstein will be calling the shots from their own screenplay (with earlier versions by Michael Gilio). Paramount is producing alongside Hasbro and eOne.

According to recent reports (Deadline and Variety), Chris Pine has been tapped to star in the feature, which is based on the iconic role-playing game from Wizards of the Coast, a company which became a subsidiary of Hasbro in the late 1990s.

The fantasy tabletop game was originally designed by Dave Arneson and Gary Gygax and published in 1974, and is widely recognised as the birth of the modern role-playing game industry.

The film has taken a while to get to pre-production, with several iterations mooted over the years. Warner Bros. got as far as setting up in early prep in the UK four years ago.

PI subscribers can log in for more on Dungeons & Dragons, including key HoDs such as the UPMs, production co-ordinator, DoP and production designer.

Titanic Studios was home to all eight series of Game of Thrones; the huge scale and cost of the HBO project boosted Belfast’s profile as an international filming hub.

The city is also home to Belfast Harbour Studios which, having opened in the summer of 2017, is now planning to expand to incorporate another six stages. That site is currently home to Paul Feig’s adaptation of The School for Good and Evil.