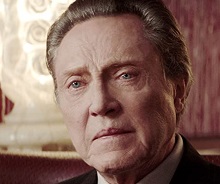 Christopher Walken is among the cast of Stephen Merchant’s new series, The Offenders, currently filming in Bristol.

The BBC One/Amazon Prime drama from Big Talk Productions follows seven strangers from different walks of life forced together to complete a Community Payback sentence in Bristol. As they become involved in each other’s lives, they also become involved with a dangerous criminal gang.

Merchant said: "Like so many other productions, we’d just begun filming when Covid-19 struck and we had to shut down. I’m delighted that we’re now finally able to resume filming with this incredible cast and finish this long-standing passion project. This is the first series I’ve made in my hometown of Bristol and I’m so excited to showcase the city and utilise the amazing local talent.”

As with all productions currently filming, strict Covid-19 safety measures are in place, including the use of a designated Covid-19 supervisor; employing local crew and supporting artists where possible; soft isolation for all cast (two weeks prior to their first day on shooting); twice-weekly PCR testing for all those working within Close Contact Cohorts and departments split into smaller cohorts, eg two make-up trailers with separate teams working apart from one another.

The third series of Amsterdam-set crime drama Van Der Valk is set to film later this month, with Marc Warren returning as the titular ‘tec.

E4 has commissioned a full series of extreme survival competition format, Naked, Alone and Racing to Get Home (w/t) following a successful pilot.