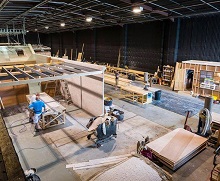 West London Film Studios is set to expand with work due to begin on four new stages at a second site next year.

The planning application was approved by Hillingdon Council for the facility to expand its operation on another, eco-friendly site based on Springfield Road, Hayes.

The new West London Film Studios’ site is just 150 metres away from the existing studio and has previously been classed as Green Belt land; it has turned into a piece of waste land with no ecological or biodiversity advantage. With the help of Wayland Planning and Development, Foster Willis Architects and David Zimber, West London Film Studios have designed a studio site plan to create and enhance the local ecological and biodiversity on the site and have included a 20 metre ‘buffer zone’ on the site between the new building and Hillingdon Cycle Circuit.

This buffer zone will enhance biodiversity and will include many exciting new ecological areas such as a wildflower meadow, shrubbery, log piles an insect hotel which will encourage the local wildlife.

The new facilities on the site will include four additional stages, four workshops, offices and ancillary rooms and also includes 87 additional parking spaces. The stages will be able to accommodate larger projects due to the available floor space and working height.


As they are purpose-built, they will also be fully sound-proofed with gantries and lighting grids fitted. The aim with the new site is to focus on sustainability with provisions to harvest rain water and use an environmentally friendly way to generate energy.

General manager Matilda Wylie said: “The team and I at West London Film Studios are really pleased with the outcome of our planning application. As an independently owned studio, this is an exciting step for us and an important one for relieving some pressure on the ever increasing demand for studio space in London and the UK.

“We are looking forward to 2021 when we start the build process and continue to embed ourselves in the local community; strengthening our support of local schools, businesses and charities, as well as cultivating new relationships."

Screenskills has launched its HETV Return to Work programme for production roles, for freelancers looking to get back into production.