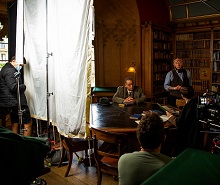 Filming has wrapped in Oxford on a feature film about writer CS Lewis, helmed by BAFTA and Emmy Award-winner Norman Stone (Shadowlands).

The Most Reluctant Convert is adapted from the hit US stage production starring Max McLean; the actor fast-tracked his plans to film the story.

Shot across twenty locations in and around Oxford, the film explores the spiritual journey of Lewis prior to the publication of The Lion, the Witch and the Wardrobe and before his marriage to Joy Davidman.

The film reveals Lewis as an Oxford don in 1950 looking back to the period of his youth from 1908 to 1931, when he slowly and reluctantly changed his views from atheism to Christianity. McLean stars as the older C.S. Lewis, Nicholas Ralph as the younger Lewis and newcomer Eddie Ray Martin as the childhood Lewis.

From losing his mother to cancer at an early age, a strained relationship with his father, to facing the horrors of the trenches in World War I, the story explores the impact friends such as JRR Tolkien Hugo Dyson and Owen Barfield had on dedicated atheist Lewis.

The Most Reluctant Convert is produced by Matthew Jenkins (Murder on the Orient Express, All is True, Artemis Fowl, Death on the Nile) and executive produced by Ken Dennison, who has produced on and off-Broadway events for around 25 years. The feature is independently financed by New York City-based Fellowship for Performing Arts (FPA) of which McLean is founder and artistic director, with rights licensed from The C.S. Lewis Company.

The cinematographer is Sam Heasman; Craig Armstrong is the composer and the production designer is Roger Murray-Leach.

“With our theatrical tours cancelled due to COVID, we moved up the film production schedule to jump on this opportunity to bring Lewis’ story of faith to life in the exact locations where they actually took place,” McLean said.

Stone remarked: “I’m a lifelong C.S. Lewis fan, and having enjoyed a long friendship with Max, to work with him on a subject we are both so passionate about brings a special spirit to the film.”

“This picture provided our cast and crew with a great opportunity during bleak times,” commented producer Jenkins, “It is a film about a remarkable man and I’m excited and confident it will find its audience.”