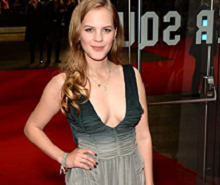 Created by Anya Reiss, the 8 x 60 drama explores the early life of England’s most iconic Queen.


Long before she ascended the throne, the young Elizabeth Tudor was an orphaned teenager who became embroiled in the political and sexual politics of the English court. German actress Alicia Von Rittberg (pictured) stars as the young queen.

Reiss has been working with an all-female writing team on the historical drama, which will use The Bottle Yard Studios as its production base. Reiss also exec produces alongside The Forge’s George Faber and George Ormond.

The Bottle Yard has also been home to previous period dramas from Starz: The Spanish Princess (two series), The White Queen and The White Princess.