Netflix's The School for Good and Evil to film in Belfast 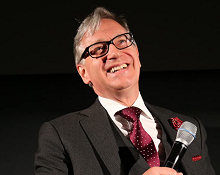 Exclusive: A feature adaptation of The School for Good and Evil is now preparing to film at Belfast Harbour Studios with director Paul Feig at the helm.

The Netflix film is based on Soman Chainani’s New York Times best-selling debut novel – the first of six in a series about a school where ordinary boys and girls learn to be fairy tale heroes and villains.


The book has sold around 2.5 million copies and has been translated into 30 languages.

The story follows follows best friends Sophie and Agatha – the former has ambitions to become a princess and knows she’ll be chosen for the School for Good, as previous alumni Snow White and Cinderella, while Agatha would appear to be a natural student at the School for Evil. But as their destinations are reversed, their friendship is truly tested.

Production Inteligence subscribers can access more details on the project including the UK UPM and executive producer.

The School for Good and Evil moves into Belfast Harbour Studios hot on the heels of Robert Eggers’ Viking saga The Northman, starring Alexander Skarsgard, which resumed production recently after an enforced hiatus of several months due to the pandemic. The studios are set to expand, having put in planning permission earlier this year to build a further six studios comprising 346,000 sq ft.