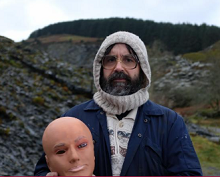 Filming is underway in north Wales on Brian & Charles, a Film4 and BFI-backed feature film starring David Earl in the lead role. Shooting was due to have begun in the spring, but the project was among the many productions suspended due to the pandemic.

Brian & Charles is based on Earl’s comedic alter-ego Brian Gittins, and his unlikely friendship with Charles, a robot. After a particularly harsh winter, Brian goes into a deep depression; completely alone and with no one to talk to, he does what any sane person would do when faced with such a melancholic situation and builds a robot - Charles (Hayward) - for company.

While things start off well, tensions begin to rise, particularly as Charles keeps eating Brian’s cabbages. Lynn Hunter, Louise Brealey, Jamie Michie and Nina Sosanya are among the cast. The feature is based on a 2017 award-winning short film and is co-funded by Film4 and the BFI.

Brian & Charles is filming in North Wales with strict Covid-19 protocols in place, with the production team receiving permission from the local authority ahead of filming commencing and a Covid-19 marshal on set throughout.

Earl said: “We’re delighted to get the show on the road and I’m looking forward to bringing Brian & Charles to the big screen. During the Covid lockdown we wondered if we’d ever be able to make it but here I am stood in North Wales staring at a 7 foot robot.”

Majendie said: “Having been ready to start cameras rolling in March, it’s great to be underway, and we’re thankful to the local authorities and community. Filmmaking during a global pandemic is a different experience and we’re taking every necessary precaution to ensure we do so safely, but we can’t wait to bring this strange and incredibly heart-warming story to life.”

Our international sister site, KFTV, is hosting a Zoom Talk sponsored by the Norwegian Film Commission, on Wednesday 22 June at 16:00pm UK time.

Pistol, Danny Boyle’s series biopic of iconic band The Sex Pistols, filmed across a variety of London locations for Disney+.