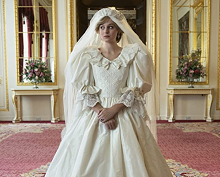 As originally reported on The Guardian, a spokesman for the SVoD giant confirmed the 100% increase on last year’s spend, saying: “The UK is an incredibly important market to Netflix and we’re proud to be increasing our investment in the UK’s creative industries.

“The Crown, Sex Education and The Witcher are among the shows that have been made in the UK this year and will be watched by the world. And these shows are a testament to the depth of talent that exists here.

Netflix drama Anatomy of a Scandal is currently in production in London, and the second series of The Witcher recently returned to its Arborfield Studios base from location work in Yorkshire.

Other scripted productions from Netflix underway in the UK include the third series of Sex Education and Neil Gaiman’s The Sandman. After Life 3, Red Rose and Stay Close are all in the pipeline too.

Production Intelligence has details on all the productions listed; take a look around the site in a free demo.

Netflix has also secured some of the key creatives associated with one of its biggest global hits, The Crown. Last year it signed up the drama’s creator, Peter Morgan and, more recently, reportedly landed an exclusive deal with Orchid Pictures, the new prodco set up by The Crown exec producer Suzanne Mackie.