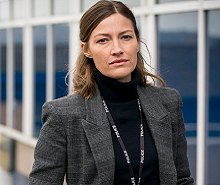 Showrunner Jed Mercurio said: "Thanks so much to our brilliant cast and crew who applied rigorous Covid safety measures to deliver Line of Duty six to our wonderful fans. We're all immensely grateful to World Productions and the BBC for the unswerving support they've given us in a time of unprecedented challenges to UK television production."

Simon Heath, executive producer for World Productions, added: “Huge praise has to go to Jed, Kelly, Vicky, Martin, Adrian and the brilliant Line of Duty cast and crew who completed filming on series six yesterday, after five months of lockdown and three more of shooting under the most trying of circumstances. The audience is in for a treat next year."

The new series is directed by Daniel Nettheim, Gareth Bryn, and Jennie Darnell, and the producer is Ken Horn. Executive producers are Mercurio and Heath for World Productions, and Tommy Bulfin for BBC One.