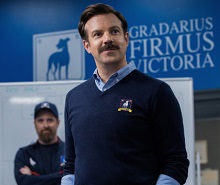 The comedy was created by Jason Sudeikis, Bill Lawrence, Joe Kelly and Brendan Hunt, and is based on a character that Sudeikis played in a series of promotional spots for NBC, when the US broadcaster began airing English Premier League games in 2013. The network then brought ‘Lasso’ back the following year as an analyst.

The first series premiered in August and within a week was renewed for a second run and subsequently a third.

The series is one of a swathe of SVoD commissions currently based in the UK. Production Intelligence (PI) has a breakdown of scripted series and films for Netflix, Apple, Amazon and more, as well as listings for hundreds of domestic features and dramas.

To take a look at the PI live site, book a demo here.