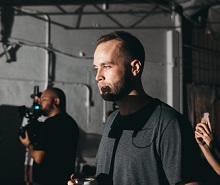 The Production Guild of Great Britain (PGGB) and the British Film Commission (BFC) are partnering to roll out a new accredited programme of Covid Supervisor training for film and television production professionals.

Backed by £100,000 investment from the BFC, the new High-Level Covid Supervisor Training Programme will be delivered by PGGB and is being developed in consultation with the US-based Producers Guild of America’s Production Safety Task Force.


Targeted at production managers, line producers and location managers, it will build on the BFC’s ‘Working Safely During Covid-19 in Film and HETV Drama Production’ guidance published in July, to introduce an international standard of best practice for the Covid safety role during film and television production.

The training will provide a thorough overview of the impact of additional Covid measures on each department involved in production and how the Covid Supervisor’s role brings these elements together.


An international standard job description for the Covid Supervisor role will be defined that can be adopted globally and the programme will also include online modules that will be rolled out to a wider international audience. Trainees will become part of the project’s online hub to share best practice and future-proof production techniques as the pandemic continues and evolves.

Helen Curston has been appointed PGGB Director of Training to lead the £100k accredited programme. A call for participants in the training programme will go out later this month.

Alex Boden, producer and chair of PGGB said: “I’m thrilled to see the PGGB partnering with the BFC on this essential new initiative. The film and TV industry has done an incredible job in re-starting production, but as we head back into lockdown in the UK, keeping the on-set environment safe is paramount.


“This training programme will help us ensure that Covid supervisors and other production specialists will receive the relevant ongoing training to keep our productions safe and to meet the challenges of the future.”

Samantha Perahia, head of production UK, British Film Commission, added: “BFC is delighted to partner with PGGB for this vitally important training programme. In addition to safeguarding the health of the workforce, the right Covid safety measures can also protect production budgets, particularly when Covid Supervisors work with producers from an early stage.


“The UK remains very much open for business. This significant investment in training shows our commitment to supporting the ongoing excellence of our professional crew.”

Professor Lyndsay Duthie, PGGB CEO commented: “Production teams around the world are adapting to new conditions in a united effort to keep the pipeline of content flowing. Our High-Level Covid Supervisor Training, developed in partnership with the British Film Commission and in consultation with the Producers Guild of America’s Production Safety Task Force, will be the new international standard of best practice for what is now one of the most vital roles within the production team. It will empower the Covid Supervisor to work as efficiently as possible, ensuring the safety of crews in the UK and helping to keep production moving during the pandemic.”

“As productions have restarted around the globe, the Producers Guild of America’s Production Safety Task Force is proud to collaborate with the PGGB and BFC on this important endeavor. This is a moment where Guilds and industry organizations can step in to collectively prepare us for current challenges and forge new practices that move us all forward. We are honored to have the opportunity to help pave the way for producers to create safe and secure work environments while continuing to produce great content,” said Lori McCreary, former PGA president and CEO of Revelations Entertainment.

New drama Extinction, one of the raft of Sky Originals announced this week, has begun filming in Bristol with Paapa Essiedu.

Sky has announced a clutch of original new dramas, as part of its raft of commissions and acquisitions – a 50% increase on its original film and TV content from last year.

The cast has been confirmed on Working Title Films' adaptation of hit stage musical Matilda, with Alisha Weir (pictured) in the title role.

Step up to 1st AD in film

ScreenSkills is hosting a new training course for experienced 2nd ADs looking to step up to the role of 1st AD.

Emergency Medical and Rescue Support for Film and TV Our film location medics come from NHS emergency services backgrounds and have extensive experience of working… more Call: 07968 183054   |   Add to Shortlist